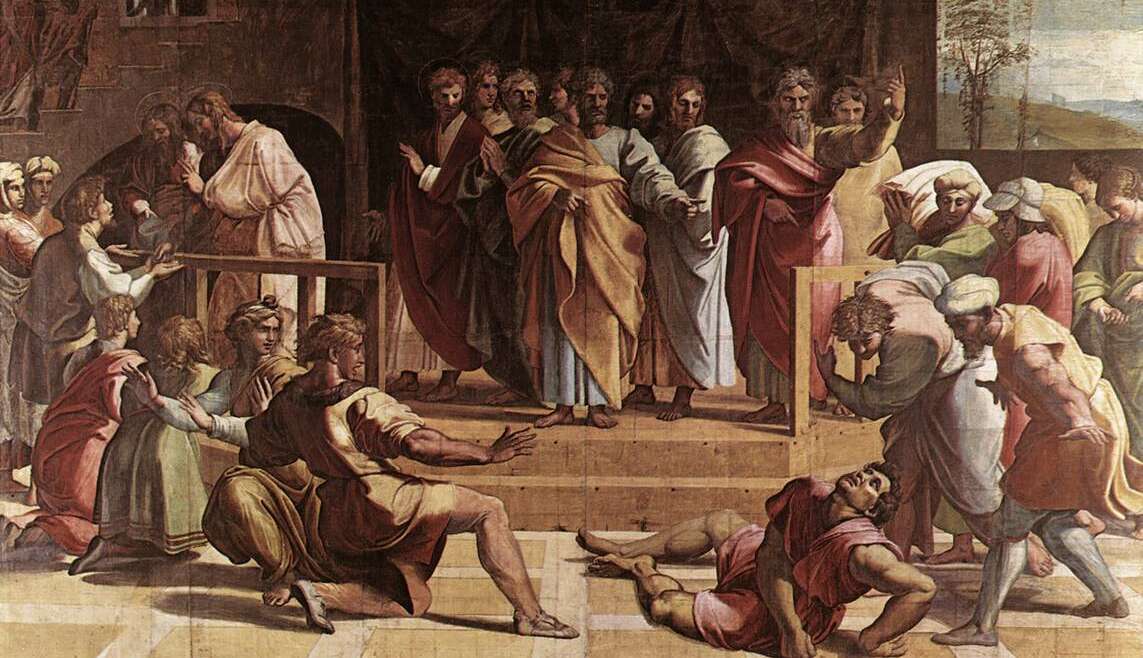 Last Sunday, we considered the origin of Peter’s bold gospel proclamation. In the book of Acts Luke focuses our attention on the power of the Holy Spirit of God to fill Christians with boldness in proclaiming the Gospel. Brothers and sisters, every age of this world is desperately in need of Christians who are bold with the Gospel, and our age is not an exception. What the world needs from you more than anything else is boldness with the Gospel.

We didn’t have time on Sunday to keep going and look at the next few chapters. If we had, we would have encountered several accounts about Peter that make us a little more uncomfortable. Acts 5:1–11 tells of Peter’s interaction with Ananias and Sapphira. Here Peter is bold in a different way. Peter rebukes Ananias when he lies about the proceeds from the sale of his property. Peter doesn’t fear the loss of Ananias’ giving or the impact on Peter’s reputation if he made Ananias mad. (In my own judgment, Peter had no idea that the Holy Spirit would strike Ananias dead on the spot.) Peter was bold to speak a sharp word of rebuke to Ananias.

Acts 8:9–25 tells of Simon the sorcerer whom Peter also rebukes sharply. Peter sees the deadly error in Simon’s thinking when he offers to buy the gift of the Holy Spirit.
“20 Peter said to him, “May your silver perish with you, because you thought you could obtain the gift of God with money! 21 You have neither part nor lot in this matter, for your heart is not right before God. 22 Repent, therefore, of this wickedness of yours, and pray to the Lord that, if possible, the intent of your heart may be forgiven you. 23 For I see that you are in the gall of bitterness and in the bond of iniquity.”” (Acts 8:20–23)

Peter was not timid when this man offered earthly treasure as though gifts may be bought. Peter rebuked him sharply. Peter was bold to speak a sharp word of rebuke to Simon the sorcerer.

In this devotion, I want to suggest that Peter’s boldness when it came to rebuking sin was part of what he learned from Jesus. Peter was the one whom Jesus rebuked most sharply. When Peter was opposing Jesus’ mission to go to the cross for sins, Jesus gave Peter a rebuke as sharp as one could imagine. Jesus told Peter, “Get behind me, Satan! You are a hindrance to me. For you are not setting your mind on the things of God, but on the things of man.” (Matt. 16:23 Cf. Mark 8:33) Jesus did not allow Peter’s mind-set-on-the-things-of-man to derail his message of cross-bearing. Because of Jesus’ example, Peter learned the value of loving rebuke.

I think that we would be in error if we imagine Jesus having lost his temper and using a harsh tone to rebuke Peter. Now I grant that this is partly speculation, but it seems reasonable that Jesus would model for his disciples what he would later command from leaders in the church through Paul’s pen.

“Preach the word; be ready in season and out of season; reprove, rebuke, and exhort, with complete patience and teaching.” (2 Tim. 4:2)

Given this apostolic injunction, surely it is unreasonable to imagine the Creator of all things losing his temper with Peter. When Jesus turns to rebuke Peter with sharp words, we should picture complete patience and teaching, gentleness and love. When Peter rebuked Ananias and Sapphira, we should expect that he was following in the footsteps of his master and imagine Peter speaking a word of sharp rebuke with complete patience and teaching, gentleness and love. (“Take my yoke upon you, and learn from me, for I am gentle and lowly in heart, and you will find rest for your souls.” (Matt. 11:29)) Unlike the painting by Raphael above where Peter’s expression is dour and angry, I expect that Peter had tears in his eyes and a patient pleading tone when he asked Ananias and Sapphira about the money.

Furthermore, the apostles are united in their exhortations to gentleness.

Paul speaking of himself: 7 But we were gentle among you, like a nursing mother taking care of her own children. (1 Th. 2:7)

Paul speaking of qualifications for elders:  3 not a drunkard, not violent but gentle, not quarrelsome, not a lover of money. (1 Tim. 3:3)

Paul giving Titus instructions on how to lead his flock: 2 to speak evil of no one, to avoid quarreling, to be gentle, and to show perfect courtesy toward all people. (Titus 3:2)

James speaking words of wisdom to the churches: 17 But the wisdom from above is first pure, then peaceable, gentle, open to reason, full of mercy and good fruits, impartial and sincere.” (James 3:17)

As we seek to grow in holiness as a local expression of the Body of Christ, we should meditate on our Lord Jesus’ example. Jesus spoke a sharp rebuke with gentleness and love. Peter followed Jesus when he was bold to speak words of sharp rebuke, and, because of Jesus’ example, we have reason to believe that Peter was also gentle and loving. Christian, do not shrink back when words of sharp rebuke are necessary. It must only be done for the good of your brother or sister in Christ. It would not be loving to lose your temper. “For the anger of man does not produce the righteousness of God.” (James 1:20) However, it is not loving to flatter with silence when your friend is walking in sin or folly.

Sometimes love calls for a word of rebuke. Let us not shrink back. Rather, let us follow Peter as he follows our Lord’s example and speak a timely word of rebuke or reproof with complete patience and teaching, gentleness, and love.

Above All, Press into the Lord